Xmas Visit by Goff to Kiwi Troops in Sinai 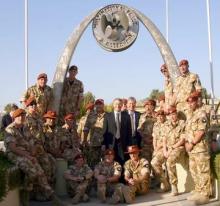 Defence Minister Phil Goff today visited North Camp on the Sinai to talk with Kiwi Defence Force personnel serving on the border of the Gaza Strip.

“Christmas is a hard time to be away from family. I wanted to acknowledge the appreciation of Government and New Zealanders to the commitment, and sacrifice, made by the more than 400 Kiwi defence force personnel who this Christmas will be serving overseas and will be away from their families,” Mr Goff said.

“We have every reason to be proud of how Kiwis serving abroad represent New Zealand. Kiwis have a deserved reputation for professionalism, competency and getting along with those whose countries they are serving in.

“This year, the Kiwis won first prize in the Force Skills Competition in the Sinai, despite the fact that they are one of the smaller groups within the 1600 strong Multinational Force and Observers (MFO) force based there.

“New Zealand has had defence force personnel serving within the MFO for 24 years, helping preserve peace and stability on the Israeli-Egyptian border.

“Security conditions have deteriorated over the last two years in the region, with two suicide bomber attacks on MFO personnel and another bombing, as well as terrorist attacks on tourist resorts in the Red Sea.

“This has resulted in a stepping up of security precautions with soldiers now using armored vehicles and full kit when outside the camp.

“The MFO have also assumed new responsibility under the Border Guard Agreement last year between Israel and Egypt, ensuring that the terms of that agreement as well as the original Peace Treaty are upheld.

“New Zealand service personnel comprise 21 men and five women from all three services. They are involved with training and advisory work, engineering, driving and as part of the MFO leadership team.

“Their work is much appreciated by the Governments of both Egypt and Israel, and we have recently extended our commitment there for a further two years,” Mr Goff said.