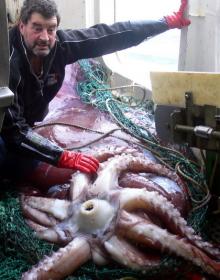 Co-operation and care from a commercial fishing crew and a Ministry of Fisheries observer led to the best specimen of an adult colossal squid arriving in New Zealand, the Fisheries Minister Jim Anderton said today.

"Colossal squid with the scientific name of Mesonychoteuthis hamiltoni is estimated to grow up to 12 to 14 metres long and has long been one of the most mysterious creatures in the deep ocean.

"The colossal squid has just arrived in New Zealand and it is likely that it is the first intact adult male colossal squid to ever be successfully landed. The scientific community will be very interested in this amazing creature as it adds immeasurably to our understanding of the marine environment," Jim Anderton said.

The squid is frozen and is being stored in the Sanford’s cool store in Timaru, before being transferred to Te Papa to be preserved for scientific study.

“It was caught by a New Zealand (Sanford Ltd) vessel, San Aspiring, which was fishing for Antarctic toothfish in the Ross Sea. The vessel was skippered by the world renowned captain John Bennett, inaugural winner of the Golden Albatross, an international award made for outstanding commitment to mitigation of seabird bycatch.

“The squid was almost dead when it reached the surface, and the careful work of the crew was paramount in getting this specimen aboard in good condition.”

The vessel was long lining for toothfish and the squid was eating a hooked toothfish when it was hauled from the deep.

"The crew stopped winching in the long-line for two hours, while the squid was manoeuvred into a cargo net and hauled aboard. It was then stored safely in the hold. The diligence shown by the crew and the fisheries observer has preserved this exciting specimen for scientific study. This is one of the many deepwater specimens our commercial fishing fleet has provided to science over the years.

"All New Zealand boats fishing in Antarctic waters have Ministry of Fisheries observers on board to monitor the catch, compliance with rules, and to help with collecting specimens.

“The excellent co-operation between Te Papa, the MFish Observer Programme, and the New Zealand fishing industry, has made this once in a lifetime opportunity an exciting reality," Jim Anderton said.

“The colossal squid will be photographed, measured, tissue sampled, registered and preserved intact into the Natural Environment collection. On-going examination of this giant will help to unlock some of the mysteries of the deep ocean. Even basic questions such as such as how large does this species grow to, and how long does it live for are not yet known.”

Jim Anderton said toothfish fishing in Antarctic waters is highly regulated and is overseen by the Commission for the Conservation of Antarctic Marine Living Resources (CCAMLR), made up of 24 member nations.

“New Zealand notifies its intention to fish in CCAMLR waters to the Commission on an annual basis depending upon the level of interest from New Zealand companies. The Commission then decides on the number of vessels allowed access to each fishery under CCAMLR management.

“Continued access for a vessel is based on its past performance in the fishery and vessels granted access to fish in CCAMLR water must adhere to strict conservation rules, undertake research work and carry observers so all activity is monitored.

“New Zealand vessels have been fishing down to the Ross Sea area since 1997/98 and have provided much information to the New Zealand scientific community, which is analysed and presented to CCAMLR.”

Mr Anderton said many of the research techniques and environmental standards developed by New Zealand vessels have become international best practice and have been transferred to other CCAMLR areas as mandatory requirements.

Colossal squid are found in Antarctic waters and are not related to giant squid (Architeuthis species) found around the coast of New Zealand. Giant squid also grow up to 12 metres, but are not as heavy.

A key difference between the two species is the size of the mantle (body) in relation to the tentacles. The colossal squid has a much larger mantle and smaller tentacles than the giant squid, and is a much heavier animal.

Another difference is the sharp swivelling hooks the colossal squid has in the suckers at the tips of its tentacles, suggesting it is an aggressive hunter. The giant squid has suckers lined with small teeth.