New Zealand is on track to Budget surplus this year, backed by good growth, more jobs and higher incomes under the Government’s economic programme, according to Treasury’s Pre-election Economic and Fiscal Update issued today.

“The Pre-election Update confirms New Zealanders have the opportunity to build on their hard-won gains of recent years – providing we stick with the Government’s successful programme,” Finance Minister Bill English says.

“Now is certainly not the time to put New Zealand’s good progress at risk with more taxes and sharply higher government spending.

“The forecast Budget surplus for this year is still modest at $297 million and the forecast surpluses in subsequent years are not large - and yet we already have political parties making expensive promises and commitments.

“We saw how this approach damage New Zealand under the previous Labour government, when the spending proved unsustainable and we went into deficit. The economy collapsed into recession before the global financial crisis, cost of living increases soared above 5 per cent and floating mortgage rates reached almost 11 per cent.”

The Pre-election Update confirms the outlook for New Zealand’s economy and the Government’s books have not changed significantly since the Budget in May.

“Some of the drivers of growth are expected to be a little stronger than forecast in the Budget, while others have weakened a little,” Mr English says.

The latest Treasury forecasts include:

“So on all of the key indicators, the Pre-election Update confirms that New Zealand is on track and heading in the right direction,” Mr English says.

“The economy is making good progress and public agencies are delivering better services in areas that really matter to communities – such as lower crime, higher educational achievement and more New Zealanders moving from welfare into work.

“While this progress is encouraging, we have more work to do. Should we have the privilege of being re-elected, the National-led Government will maintain a busy programme of policy reform aimed at supporting more jobs and higher incomes for New Zealanders.”

The Pre-election Update is available at: http://www.treasury.govt.nz/budget/forecasts/prefu2014 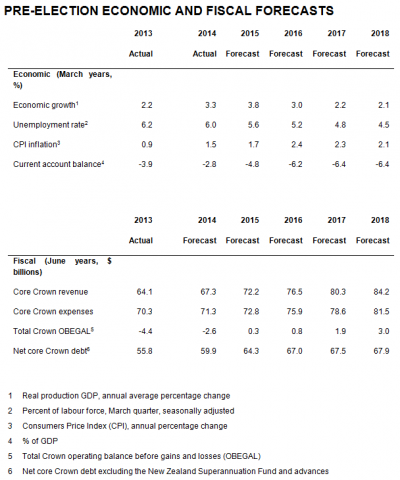