Last year the Government announced plans to boost the introduction of LED lighting to some urban streets around New Zealand by accelerating funding, encouraging innovative procurement options and through targeted information drives.

“A year ago only 4 per cent of all street lights were LED. To reach 10 per cent in just a year is a great advancement. This is a great start to the programme of converting the more than 370,000 high pressure sodium lights that currently line our streets to LED,” Mr Bridges says.

“Within the next two years we expect about 35 per cent of all street lights to be converted to LED – conversion programmes in two of our bigger cities, Auckland and Dunedin, will be well underway.

“By 2020, about 20 local authorities expect to have substantially completed their conversions to LED street lights, with a further 13 expected to achieve the same outcome by 2025. This will mean 61 per cent of all street lights will have been converted within 10 years.”

“The Government’s announcement last year made it easier for local authorities to access funding for LED street lighting. It’s great that Auckland has taken up this opportunity. Once the first part of the programme is complete, they will have replaced 44,000 street lights, leading to a $32 million saving over the 20 year life of LEDs,” Mr Bridges says.

“Research shows that LED lights are 20 per cent cheaper over their lifetime than high pressure sodium lights. The total annual cost of road lighting in New Zealand is $50 million and a conversion to LEDs is conservatively estimated to save about $10 million per year.

“More generally, sales of LEDs in supermarkets have significantly increased from 1,600 in 2012 to more than 250,000 last year.  As the costs of LEDs decrease, more consumers are making the switch.  A typical household can save around $190 each year by replacing 24 conventional bulbs with LEDs.” 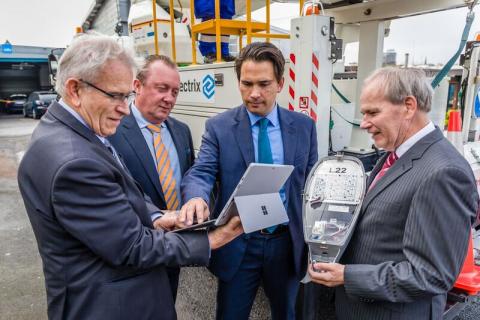