The first ever snapshot of central government spending by region shows that taxpayers’ dollars are being evenly distributed across New Zealand. 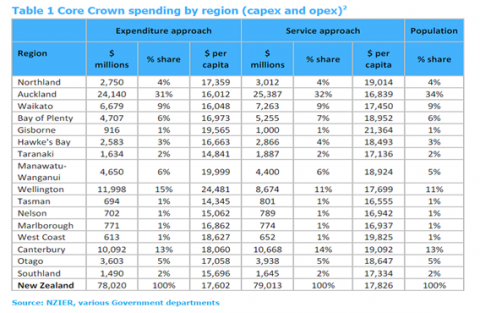 “The development of all of New Zealand’s regions is hugely important to the Government and the national economy. This report shows the Government is investing in all our regions helping to support families, business growth, jobs and higher incomes,” Mr English says.

“The report will be a useful tool to monitor changes over time alongside the Regional Economic Activity Report and Statistics New Zealand’s Regional GDP update, which have both been released in the last four months.”

Mr Joyce says the report covers all Government expenditure, everything from building roads and hospitals, to social welfare payments, education and research and development.

“The results in the expenditure report show that regional expenditure broadly reflects the size of the population in each region,” Mr Joyce says.

“Small variations in Government spending across regions reflect their different demographics and characteristics. Regions with higher numbers of older people tend to have higher superannuation and health expenditure; areas with lower unemployment tend to have less social welfare spending.

“The Government remains committed to strengthening investment in all our regions helping them achieve their potential and boosting jobs and quality of life for all New Zealand families.”

The report is available at:
http://www.med.govt.nz/sectors-industries/regions-cities/research/regional-government-expenditure-report