Critically endangered plants and a rare limestone ecosystem have been protected through the purchase of a 20 hectare reserve at Gards Road, near Duntroon in the Waitaki Valley, Minister of Conservation Dr Nick Smith announced today.

The purchase of the new scenic reserve, from David and Lorraine Parker’s farm, was completed through the Nature Heritage Fund and is the first of its kind in the region.

“In the past we have seen a greater focus on protecting the high country in this area through processes such as tenure review, so it is a credit to the Parkers that we have now secured the protection of this threatened lowland habitat,” Dr Smith says.

“The Parkers have worked hard to conserve this site over the years through weed control and have always supported DOC’s work in the region.

“This site hosts a range of rare plants and is also an important archaeological site with evidence of early Māori occupancy. The limestone beds boast a spectacular fossil record of dolphins, whales and penguins and hopefully one day the reserve will become part of the Vanished World fossil trail.”

Restoration work to remove the thorny boxthorn weed and establish new populations of threatened plant species will be kick-started with a volunteer day on Saturday 23 February. See http://www.doc.govt.nz/getting-involved/volunteer-join-or-start-a-project/volunteer/volunteer-programme-by-region/otago for more details.

The Gards Road site has been acquired to intensively manage the rare plants found on its soft, strangely weathered limestone cliff tops. The cliffs provide refuges for many native herbs, including prostrate kowhai (Sophora prostrata) and Oamaru limestone’s own native broom, Carmichaelia hollowayii. It is one of only three places in New Zealand where the nationally critical Carmichaelia hollowayii grows, having fifteen of the sixty remaining plants found in the wild.

The site also has the strongest population of the native cress Lepidium sisymbrioides, a nationally endangered species, with hundreds of the plants spread around the reserve. Raoulia monroi, a mat daisy, and an un-named Gentian are other threatened plants found hiding here. Little native vegetation on limestone habitat now remains in the Waitaki. 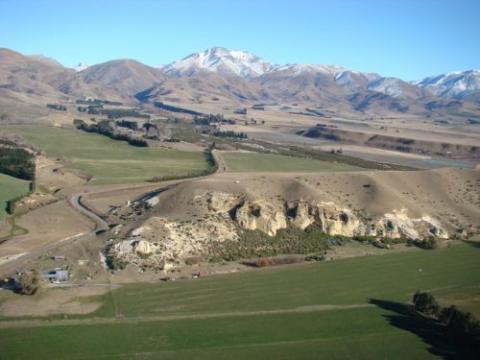