“Since then exports to Chinese Taipei have increased over 20 percent compared with the same period the previous year, a $150 million increase,” says Mr Groser.

“Over 69 percent of New Zealand’s exports to Chinese Taipei are now tariff free, representing savings of around $78.4 million to date.”

The agreement will see complete removal of tariffs on New Zealand’s current exports to Chinese Taipei, with 99 percent eliminated in four years.

“Tariffs on virtually all dairy products were removed from day one, along with apples, cherries and wine. This has been a boost to all these industries, especially apple exports which have tripled from $13 million to $39 million,” says Mr Guy.

“This agreement continues to be a great example of how trade deals benefit New Zealand, particularly for growers and producers in the regions.” 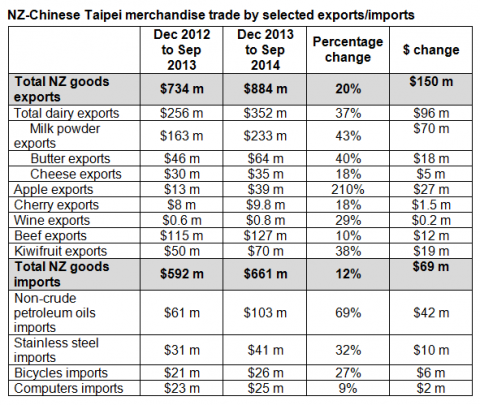