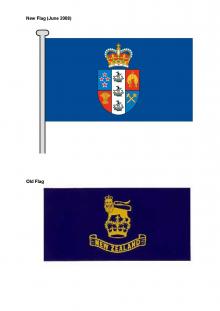 Prime Minister Helen Clark today announced that Her Majesty the Queen has approved a new flag for New Zealand’s Governor-General.

“The previous flag was a generic one, designed for an earlier era which did not reflect New Zealand’s constitutional status as an independent nation. It was of a standard pattern designed for use by Governors-General of the then Dominions, with the Royal Crest surmounted by a crowned lion in the centre, and with the words ‘New Zealand’ in a scroll beneath. The Royal Crest used on it is now widely used as a trademark by a trading subsidiary of the Royal Collection Trust,” Helen Clark said.

“The new flag is a distinctively New Zealand flag which, like the Queen’s Personal Flag for New Zealand, is based on the elements of the New Zealand Coat of Arms.

“The design for the new flag, with the Shield and Crown in the centre, mirrors the Badge of the Collar of the New Zealand Order of Merit which can only be worn by the Sovereign and the Governor-General,” Helen Clark said.