More success for thousands of children

Education Minister Hekia Parata says thousands more young people are on the road to success as a result of continued improvements in NCEA achievement and early childhood education participation.

Ms Parata says the improved results for the Better Public Service Targets in both areas highlight the impact of extensive work to make sure that all kids get the chance to do their very best.

“That means in the past two years alone, nearly 1600 more kids getting over the line. That’s an outstanding achievement that gives them many more options in life and better prospects.

“We know there’s more work to do, particularly for the target groups, to ensure we have 85 per cent of all 18 year olds achieving NCEA Level 2 by 2017 and we’re doing it. The targeted approach our Government is taking to education works.

“Over the past five years we’ve focused on collecting data from across the whole education system so we can see how it’s performing at every level and where we need to target resources.

“That has helped identify which students need what kind of support through programmes such as Pasifika Power Up, Youth Guarantee, Achievement 2013-17, and Trade Academies.”

Ms Parata says the $359 million Investing in Educational Success initiative is designed to lift student achievement further through improved teaching and leadership in school and will also mean better outcomes.

“We know those are the two areas that have the biggest in-school impact on student achievement, and that’s why this investment is being made.

Ms Parata says the increase in early childhood education (ECE) participation to 95.9 percent is exciting because it gives so many more children the right start in life.

“We’ve seen growth for all groups in ECE participation including Maori and Pasifika, and overall it represents another 3,839 kids since mid-2011.

“We are committed to continuing all efforts to make sure that by 2016, 98 per cent of all new school entrants will have been in ECE.

“We have made big strides. We are going to continue building on that by looking at further support in particular for children with special needs and working to make the whole education journey more seamless and successful. In both of those areas we’re already making significant investment.

“We have increased funding for special needs by 26 per cent over the past five years and have given schools a $600 million increase in operational funding that covers areas like teachers’ aides.

“There is of course more we want to do in special needs. That will be of the focus of more work over the coming months, as will Investing in Educational Success so we have communities of schools and the new roles for teachers and principals in place from next year,” Ms Parata says. 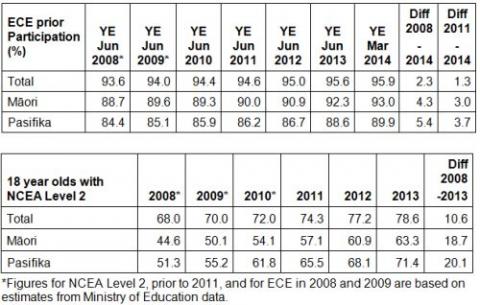