Transport Minister Simon Bridges has opened the first South Island cycleways to be funded by the Government’s Urban Cycleways Programme in Christchurch today.

Mr Bridges cut the ribbon at the new Matai Street East section of the city’s UniCycle route, the same day as the Rolleston to Lincoln cycleway also opened.

These projects – as well as the soon to be opened Papanui Parallel cycleway -have been funded as part of the Urban Cycleways Programme, which enables high-quality projects to get underway much sooner than may otherwise have been the case.

Over the next three years the Urban Cycleways Programme will invest $333 million into 54 cycleways across the country – the single biggest investment in cycling in New Zealand.

“The new cycleways in Christchurch and Selwyn will make cycling a safer, more attractive transport choice for thousands of people cycling to school, to universities and into the CBD.

“There is a strong commitment in Canterbury to get people on bikes. Nine other cycleways in greater Christchurch will soon be accelerated through the Programme and will eventually form part of the wider Canterbury network for pedestrians and cyclists.

“It’s the ultimate transport choice and I hope to see this kind of model repeated across the country,” Mr Bridges says.

Mr Bridges says the Urban Cycleways Programme demonstrates how central and local government can work together, delivering high-quality infrastructure which will encourage more people to ride to work, schools, shops and everywhere in between.

Canterbury projects to be accelerated under the Urban Cycleways Programme: 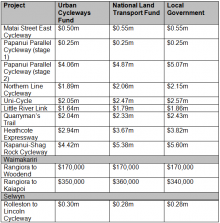