Local Government  Minister Chris Tremain says he will be instructing a working party to explore what would be needed for online voting to be fully introduced in the next local  body elections.

Voter turnout at the 2013 election was the lowest ever recorded with a projected figure of around 40 per cent.  Final results will be confirmed by Local Government New Zealand on Thursday.

“Figures as far back as 1962 (see below) show voter turnout at local body elections are traditionally low but I am concerned that it is on a slow decline,” says Mr Tremain.

“A large number of people work from smart phones and online voting is definitely the way of the future.  However there are risks involved in transferring to an online system, so it is important we clearly understand those risks before making any final decision.  Accessibility for all voters is a critical consideration in any move forward.

“The government has invested in online verification technology, RealMe, which will enable secure authentication of a person’s identity for online voting.

“The working party, which was announced before the recent local body elections, is being tasked with establishing the technical, financial, and security issues involved in online voting.  In addition I will now ask them to explore the possibility of having full online voting available at the next local body elections.  A condition of this must be that an opportunity exists for a significant trial before 2016.

“I will also be inviting the Justice and Electoral Committee, who conduct reviews of local and national elections, to investigate other initiatives that will lift voter turnout.

“Part of this will be considering the confusion created by the single transferable voting system especially when voters are presented with two voting systems on the same voting papers. Another issue that has been raised, post the elections, has been the three week voting timeframe, so it would be timely to consider this as well.

“Online voting will give people more choice but on its own will not solve low voter turnout.” 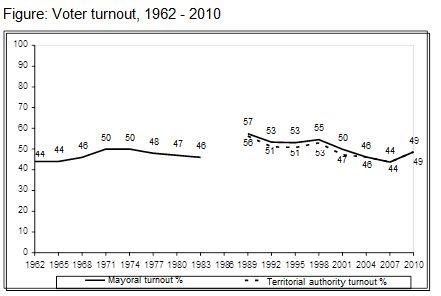 Note: 1986 data was not collected in a comparable form. Data from 1989 represents turnout in mayoral and territorial authority elections. The general decrease in turnout between 1989 and 2007 was relatively consistent across all types of elections.