Harm reduced as tobacco left at the border

The more than 800kg of tobacco and cigarettes left at the border since 1 November is a further step towards reducing the damage caused by smoking, say Customs Minister Nicky Wagner and Associate Health Minister Peseta Sam Lotu-Iiga.

The duty free allowance fell from 200 cigarettes to 50 cigarettes on 1 November. This has resulted in about 810kg of cigarettes and tobacco being left by travellers at the border and almost $259,000 in tobacco revenue being raised.

At Customs Air Cargo Inspection Facility in Auckland, the Ministers today saw first-hand a quantity of 390kg of cigarettes left by passengers who chose not to pay duty on their excess cigarettes.

“The change to the new limit went smoothly,” says Ms Wagner. “Domestic and international advertising made passengers aware of the change, and new streamlined processes at airports made it easy for travellers to dispose of or pay the duty on any excess cigarettes.

“I was pleased to see good cooperation between Customs, Ministry for Primary Industries, airport companies and duty-free shops to help passengers adjust.

“Most travellers now know about the new duty free limit of 50 cigarettes or 50g of tobacco. With many Kiwis travelling or hosting visitors from overseas these holidays, it’s timely to remind everyone of the change.”

Mr Lotu-Iiga says the duty free change is another welcome step towards reducing the harm caused by smoking, with the aim of making New Zealand smoke-free by 2025.

"The tobacco left at the border is a harmful product that will now not be used by smokers. Decreasing the duty-free concession gives smokers another incentive to quit by reducing the availability of cheap tobacco,” says Mr Lotu-Iiga.

“Price is a strong incentive to get people to stop smoking and deter young people from starting.

“The smoke-free 2025 goal is a challenge, but one that can be realistically achieved with continued and additional efforts on a range of tobacco control fronts.”

A gift concession is no longer available for cigarettes or tobacco sent by mail or cargo: duty and GST is payable on the entire amount. Approximately 350kg was sent during the period, and Customs holds this to allow importers time to pay before it is destroyed.

You can calculate what you will pay on cigarettes and tobacco and other goods using Customs’ free What’s My Duty app, also available at www.whatsmyduty.org.nz, or through www.customs.govt.nz. 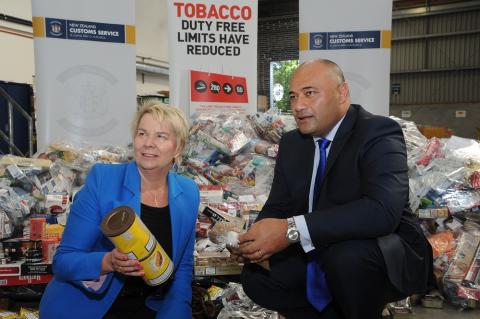