A renewed focus on tackling the drivers of crime has helped the Government exceed its Better Public Service (BPS) target to reduce crime two and a half years ahead of schedule, Justice Minister Amy Adams has announced.

According to the latest figures, the total recorded crime rate is down 18 per cent since June 2011 and well surpassing the Government’s original target of a 15 per cent reduction by June 2017.

“Exceeding the target ahead of schedule is an outstanding result. Less crime is being committed and that is something we can all be very proud off,” says Ms Adams.

“In 2014 more than 67,000 fewer crimes were committed than in 2011, meaning significantly fewer victims and improved public safety.”

Official figures show that the recorded crime rate is at its lowest since 1978.

“But there’s more work to be done. That’s why I’m announcing that the Government has committed to a new BPS target for the total recorded crime rate – a 20 per cent reduction by June 2018,” says Ms Adams.

This revised target was confirmed in December 2014 and fulfils a commitment during the election campaign.

“The BPS targets are about challenging the public sector to perform smarter and more effectively. While I'm pleased to see the original crime rate target surpassed, no level of crime is acceptable so it's important we set ourselves a new target to ensure the sector is challenged to do even better,” says Ms Adams.

For the year ended December 2014, the reoffending rate rose slightly by 1.3 per cent and violent crime rate by 1.1 per cent, although both targets are still down overall from 2011.

“Crime is substantially lower. We’re making good headway with getting reoffending and violent crime rates down overall, but it’s proving hard to achieve those further gains. A particular focus of the next year will be addressing the drivers of violent crime to bring down the rate further,” Ms Adams says.

Further info can be found at: www.justice.govt.nz/justice-sector/better-public-services-reducing-crime/progress-updates 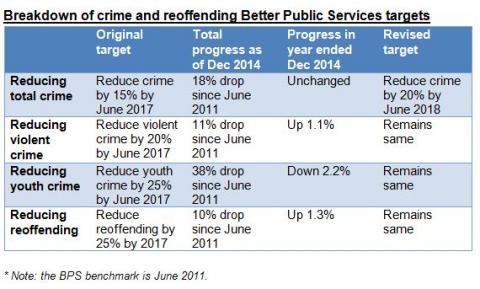