Additional $2.1b for Christchurch’s recovery

With the total cost of the recovery increasing to an estimated $40 billion, the Government’s contribution will increase from around $13 billion to $15 billion.

That includes over $900 million in new capital funding from the Future Investment Fund, which includes the Christchurch and Burwood hospitals redevelopment, funding for the justice and emergency service precinct, and tertiary education institutions.

“In Budget 2013, this Government has recognised the substantial financial support Christchurch needs, not just to get back on its feet, but to position itself on the world stage as a great small city where people want to live, visit and invest,” Mr Brownlee says.

An additional $303 million has been earmarked for the Christchurch Central Recovery Plan, enabling Christchurch to rebuild and redevelop into a world class city.

“This will give reassurance to the people of Christchurch that this Government has invested in the city’s recovery for the long haul,” Mr Brownlee says.

“Plans are well under way for how the city will look in the years to come. This funding is about enabling that to happen.”

Budget 2013 has also set aside funding for final land zoning decisions, the work of the Canterbury Earthquake Recovery Authority, and a number of education initiatives.

Together with the funding earmarked for the central city, this takes the full amount of operating funding for Canterbury in Budget 2013 to over $500 million.

The remainder of the total increase includes $642 million of capital funding from existing balance sheets, which will mainly be used for health and education projects in Canterbury. 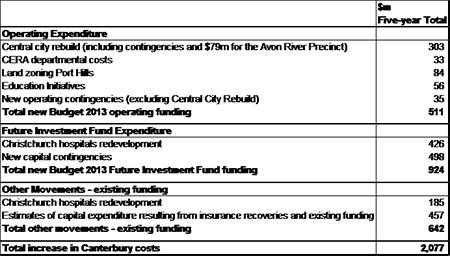