“Over the past 12 months, the Canterbury Earthquake Recovery Authority (CERA) has used the Recovery Fund to kick-start the rebuild and improve the lives of Cantabrians,” Mr Brownlee says.

The Government’s major and ongoing decision-making task in response to the earthquakes is the zoning of residential land, based on damage, to provide all Cantabrians with better options for the future.

Owners of the 7,256 most badly-damaged and quake-damage-prone properties are eligible for Crown purchase offers, and to date 6,162 owners have been sent offers.

“So far, we’ve paid out almost $600 million in residential red zone property settlements ahead of expected insurance payments, to enable people to move on with their lives,” Mr Brownlee says. “Many more settlements will occur over the next year and we expect the dollar figure to at least double.

“We know residents are concerned about ongoing maintenance and security in the residential red zone, so $94.7 million operating spending has been allocated in 2011/12 and 2012/13 for management of these properties.

“In the CBD, nearly $60 million has been spent on demolition in the past year. We are successfully recovering that money from building owners, with nearly $35 million recovered already. Recovery of costs will continue.

“An additional $29.9 million in operating funding will be provided over four years for the new Christchurch Central Development Unit (CCDU), which will manage the rebuilding of the CBD.

“The people of Canterbury can be confident this Government will continue to provide the support they need to rebuild a dynamic, innovative, and first-class city,” Mr Brownlee says.

“The health and wellbeing of Cantabrians have been at the forefront of the Government’s earthquake response.

“Extra funding and resources from the ministries of Health and Social Development ensured rapid response, going back to the first major quake in September 2010, and throughout 2011.

“Recognising the importance of consistent, easily accessible and reliable engagement with the people of Canterbury, Budget 2012 has confirmed an operating budget in excess of $2.8 million in 2012/13 for CERA’s Community Wellbeing team.

“Over the coming year, CERA will work closely with its partners across the social, health, insurance, business, and local government sectors. There are services and resources available to Cantabrians in need and we’re working hard to ensure they know that,” Mr Brownlee says. 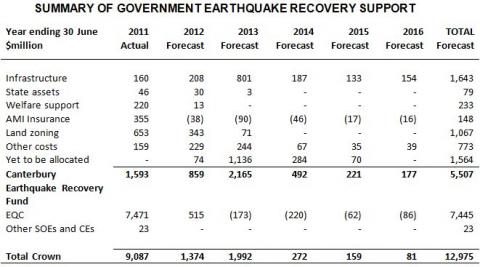