“These new MPAs will add 9557 hectares to New Zealand’s protected area network and be a major boost to protecting and improving our marine biodiversity,” says Mr Guy.

“I want to acknowledge the key role that local communities have played in this process. This is the culmination of years of effort on the part of the West Coast Marine Protection Forum.”

The Forum was made up of representatives of tangata whenua and a range of groups with an interest in the West Coast marine environment, including commercial and recreational fishers, environmental groups and local government.

“I applaud their willingness to seek constructive compromises, which has helped to balance protection and use of the marine environment.”

“These areas will protect marine life without significantly impacting fishers and other marine users. It’s a win-win situation.”

The Fisheries (Challenger Area Commercial Fishing) Regulations 1986 will be amended to prohibit the use of mobile, bottom-impacting commercial fishing methods in the areas which border the Hautai and Punakaiki Marine Reserves (see attached maps).

The regulations will protect benthic (sea bed) habitats in these areas, while still allowing some (non-damaging) fishing methods to continue in the new MPAs. All fishing activity is prohibited within the adjacent marine reserves. 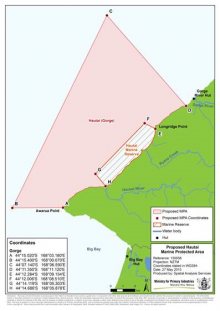 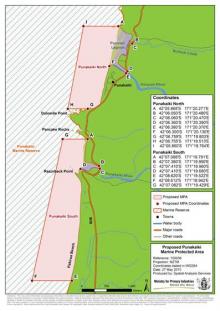