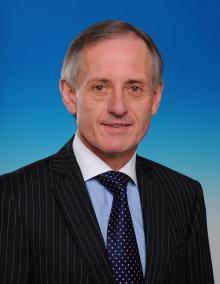 Martyn Dunne has been Comptroller and Chief Executive of the New Zealand Customs Service since September 2004. Prior to joining Customs, Martyn spent 27 years in the New Zealand Defence Force, most recently as Commander Joint Forces in the rank of Major General, and his military service included appointments with the New Zealand Special Air Service (SAS).

In September 1999 he was appointed as the first New Zealand Senior Officer to East Timor and, concurrently, held an operational command position within the International Force East Timor (INTERFET) where he commanded the Dili area of operations during the INTERFET deployment. Following his service in East Timor he was made a Companion of the New Zealand Order of Merit (CNZM), one of many achievements during his distinguished career.

In June 2008 Martyn Dunne was elected Chairperson of the World Customs Organisation (WCO), and in June 2010 was re-elected for a further one year term. He is a graduate of both the Australian College of Defence and Strategic Studies and the Australian Command and Staff College, and holds a Masters of Arts Degree in Strategic Studies from La Trobe University, Melbourne.

“Australia is our indispensable ally, partner and friend,” Mr McCully said. “The new High Commissioner's job will be to ensure that this most important relationship for New Zealand is not only maintained in good health but extended and strengthened.

“The trans-Tasman relationship is uniquely close, underpinned by geography, shared security interests, common values and institution. Australia is our most important trading partner, business ties are highly developed, and our economies are highly integrated, thanks to CER and the drive towards a Single Economic Market,” concluded Mr McCully.

Martyn Dunne will take up his assignment in late March replacing John Larkindale who is retiring.